On our 3rd day in Tasmania, the main thing in our itinerary was Cataract Gorge river park in Launceston. We left Freycinet past 9am and arrived at Launceston around 12:30pm. The drive should just be 2 hour and a half but we had a coffee stop at Campbelltown. We tried to find a decent restaurant around the town center but everything were closed! It was Easter Monday apparently and most of the establishments we went to were only opening at 2PM. We saw a bakeshop and just settled for meat pie and chocolate cross buns.

Although Cataract Gorge was a bit “tourist-y”, it was still able to give that sense of wilderness. And it’s good that it’s just 5 mins drive away from the center. Aside from the river, the park features a chairlift, a suspension bridge and several walking tracks for everyone. 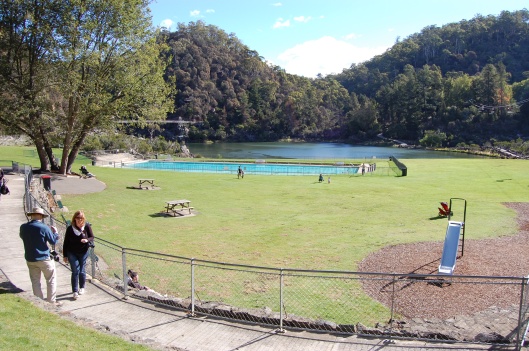 Swimming pool by the basin. No one dared to dip that day, it was chilly! 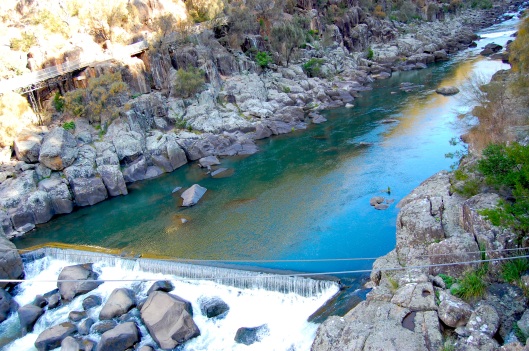 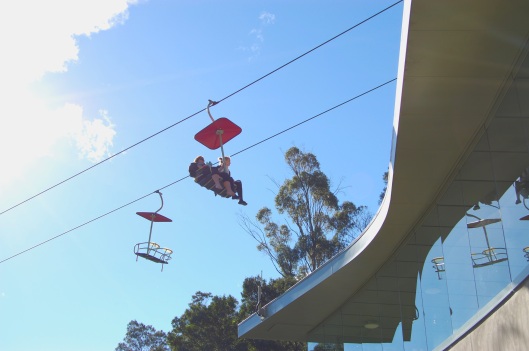 Chairlift costs $12 one way and $15 return. I would say that it’s a bit stiff, and if you already experienced cable lifts some other place, you may want to spend your $15 on other things. However, I was glad we got one way ride because it scared Andrew so much he almost fainted. Hahaha! Ok, I’m exaggerating. I really didn’t notice that he was scared. If I had know, I would have wiggled the chair to make him scream. I’m evil

It’s cool how they shaped the trees to give way to the chairlifts!

We tried the famous walks, walked along the suspension bridge, checked the peacocks and did everything a normal tourist would do.

Andrew by the inclinator

However I don’t get that excited with the normal stuff and because it was still early to call it a day, we did one difficult track – the one that goes to King’s bridge. Well, it was difficult according to the park brochure but I was only wearing mg crocs and didn’t have a hard time going through the steps. Maybe they marked it difficult because you can’t take prams on that track. I liked that walk because we did sweat a bit as half part was uphill. There were also fewer people doing the track so it was more peaceful compared to the main parts of the park. 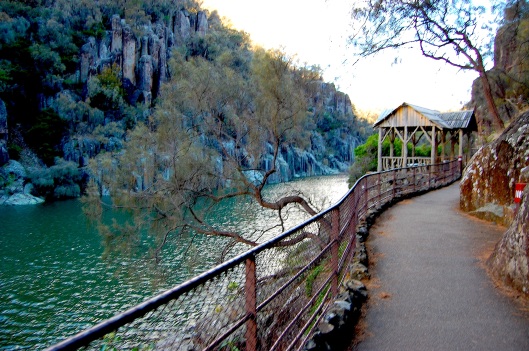 From the King’s Bridge 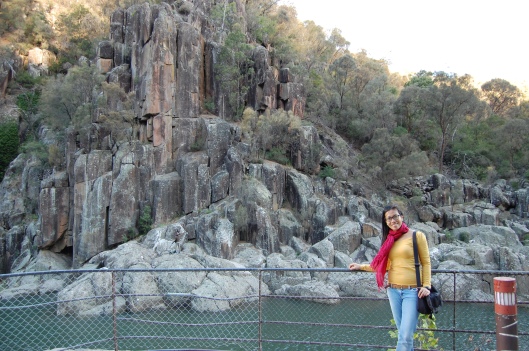 I love the color of the rocks behind me

The park also hosts 2 cafes which should be good after few hours of walking. We didn’t have anything there because we wanted to make sure that Coles will still be open when we go back to the town as we needed supplies for our dinner that night.

Cataract Gorge is one of those relaxing outdoor destinations where you just breathe in, watch and listen to nature, walk slowly and just let time pass you by.