Moussaka is a traditional Greek eggplant-based dish. It’s similar to lasagna, but you’ll have eggplant and potatoes as layers instead and you have a white bechamel sauce on top. 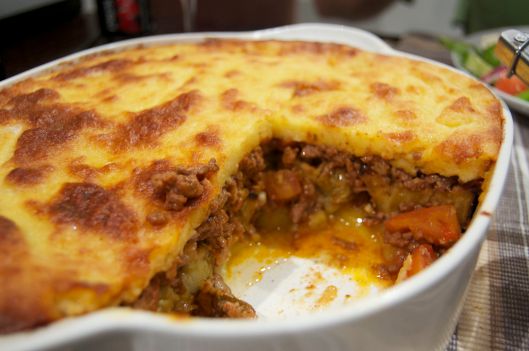 Basically, you just have to prepare 1) the minced meat filling, 2) the eggplants and potatoes for layers and 3) the white sauce as topping. Seems simple but it took me 2 hours to finish this dish! Mostly because I didn’t know what to do exactly and I had to check the recipe once in a while.

I’m going to warn you that I will not be giving exact measurements for each ingredient. Not because I don’t want to, but because I don’t remember how much I used. I don’t follow the measurements from the recipe all the time, I base it on my gut feel. Maybe I got this from my mother, every time I ask her of a recipe, she would just say the ingredients and would not tell the measurements. She would always say “tantyahin mo lang!” (just estimate it!).

I followed these 2 recipes:

The first one is a simple way to do it and the 2nd one seems to be more traditional. The second one has more ingredients and has more complicated ways of doing each step. I managed to use the 2 recipes and also incorporate my own flavors (may ganon?!).

If I’m going to this dish again, I will do it in this order:

1. First of all, pre-heat the oven. You will need it to be on the maximum temperature for the eggplant.

Peel the eggplant and slice into 1/2 inch. I guess what I did was more than 1/2 inch, I was scared that it will be too thin and it will fall apart after I fry/bake them. So after slicing, add salt on both sides and just set it aside. It’s recommended to allow it to sit for at least 15mins, a recipe even suggested to allow 1 hour. This allows the eggplant to “perspire” its bitterness.

Rinse the eggplant and towel dry to get rid off extra water. The you can either fry the eggplant slices, or bake them. I decided to bake them because I didn’t have a big pan to accommodate several slices at a time. In the second recipe, the eggplant should be coated with egg white and breadcrumbs first before putting inside the oven. I didn’t have breadcrumbs so I just covered it with egg whites. I placed it in the oven for 30 mins, turning it halfway through.

The sliced eggplants after 30 mins

For the potato, peel it and place it in a saucepan with water. Bring water to boil and check the potatoes if already cooked through, be careful not to overcook it as you don’t want to have mashed potatoes. When cooked, sliced the potatoes, depends how thick you want them in your dish.

So with all the waiting time preparing the veggies, you can do the meat filling.

I used 1 kilo of minced beef (ground beef) on the last dish because I wanted it to be really “meat-y”. Sautée the meat with a large brown onion and 3 cloves of garlic. Make sure there were no more pink parts of the minced beef before adding the other ingredients.

I used Shiraz because that’s the only red wine in our cupboard. Add enough amount so you can taste that there’s wine  in there. And then add the tomato sauce, tomato paste, cinnamon and all spice. I used Del Monte Tomato Sauce (a Filipino brand), poured just enough to make the minced meat a bit saucy but still chunky. I used 2 spoonfuls of tomato paste, around 3 dashes of cinnamon and 1 dash of all spice. Honestly, I don’t know how cinnamon and all spice can affect the taste. I should experiment on this next time. Then I added raw sugar. I tasted it and I felt that it’s lacking something. I followed my mother’s advice on all tomato-based dish, add butter and cheese. So I added some butter and and cheese and a bit more sugar. It was perfect!

You can also add diced tomato towards the end just to have a different texture on the filling.

4. Assemble the potato, eggplant and the meat filling

Grease first the baking pan then you can assemble it anyway you want it.

Potatoes as the base layer 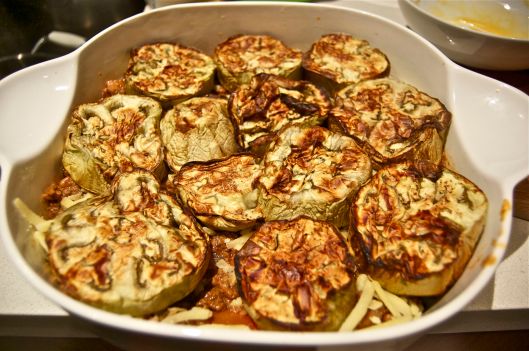 Next time I’ll do it, I’ll have 2 layers of thinner eggplants.

I suggest you make the bechamel sauce when everything’s ready. I did it quite early last time and I had difficulty spreading it on top because the sauce got too sticky when it was no longer warm.

Melt a bar of slated butter over low fire (or you can microwave it), add half cup of flour stirring continuously. Then add 2 cups of warm milk, stir until everything’s thick. Remove from and ddd 2 beaten egg yolks and cheese. You have to remove it from heat so the egg will not cook straight away. Then return it to heat and stir until it thickens.

Pour the the sauce on top of the meat filling. I don’t have any spatula so I just tried to smooth it using a spoon. Haha!

Not so smooth top layer 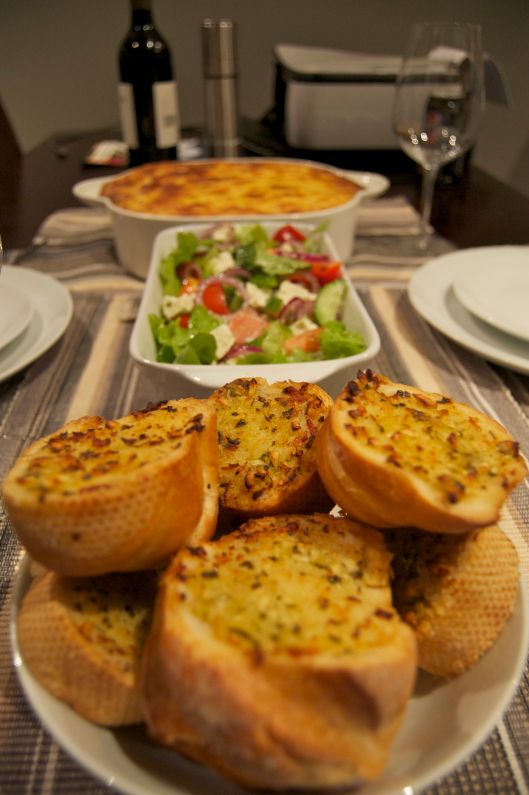