My first NYE in Sydney (2012) was spent by sitting on concrete grounds of Circular Quay for 12 hours under the sun just to see the famous fireworks at midnight. It didn’t feel too bad while waiting as I was with a group of friends (most are even from Manila), and I was still excited to see the fireworks and I knew I was on the best spot to watch it. But I’ll never do that again. 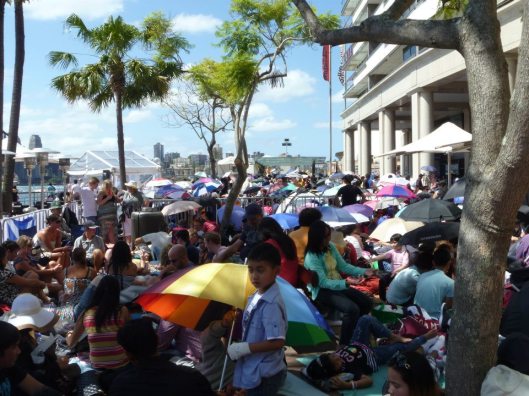 Waiting for fireworks at Circular Quay

So for NYE 2013, I stayed at home with Andrew, and we went over at Monde and Tim’s to see a bit of fireworks from their balcony. We were at Rhodes, so we basically saw the city skyline turned reddish. We were watching the fireworks on TV to give us the details. haha!

I wanted something special for 2014 but I didn’t want to be stressed. I was lucky that when I checked Cockatoo Island, there were still spots for Area B camping. I didn’t know what’s in Area B, I just thought that as long as we’re at Cockatoo, it should be good. So I booked it straight away, 2 friends said yes when I told them about the camping spots, and 4 other friends booked for another 4-person site.

So how was our new year’s eve at Cockatoo? 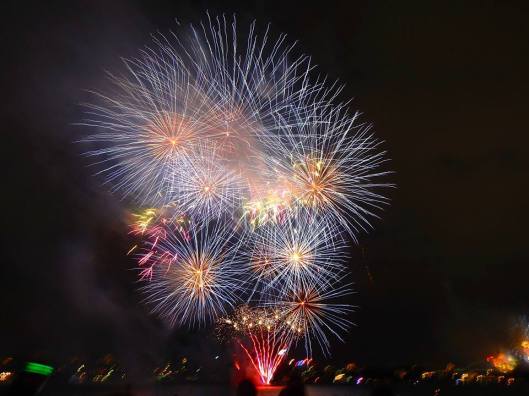 Fireworks as seen from Cockatoo Island 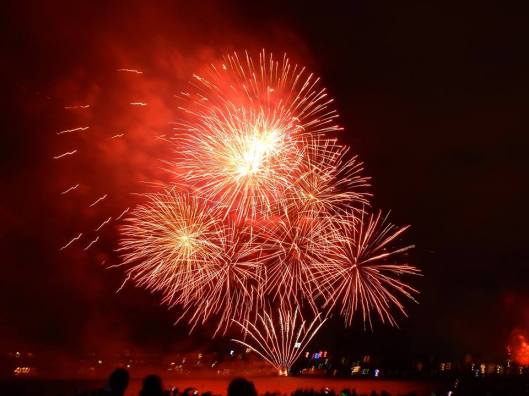 Fireworks as seen from Cockatoo Island

Both photos of fireworks are from Paul Villena. I tried to take photos using my camera but I’m getting rusty so I just stopped using it and enjoyed the fireworks instead.

2. We had a great view and we didn’t have to tip toe or try to lengthen our necks just to fight for our view. In CQ, you get a good view but it’s so packed and the angle is so bad that the person in front of you can block everything that can possibly see. With Cockatoo, even if you’re sitting on the common ground, you can still see the fireworks when you look up. Sweet, right?

3. We also didn’t have to suffer under the sun for 12 hours, with just 3 inches away from someone you don’t know (yes, I did that in 2012 at CQ). There were a lot of other campers but the island is big enough to accommodate and most probably the island management already know the maximum number that it can accommodate. We didn’t have to be there very early on the 31st to save a spot. Me and Andrew got there around 5pm (Andrew had to work until 2PM), hung out with friends under a shade, and then laid on our mats on the common area as soon as the sun was out as we waited for fireworks. 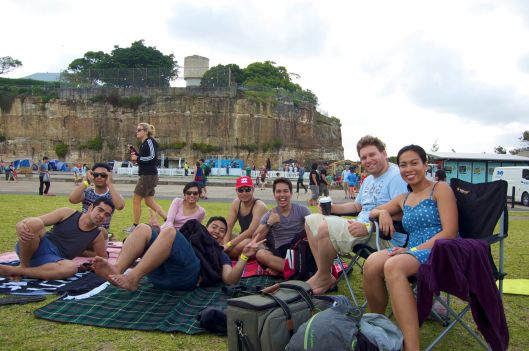 The Cockatoo Island team around 5PM 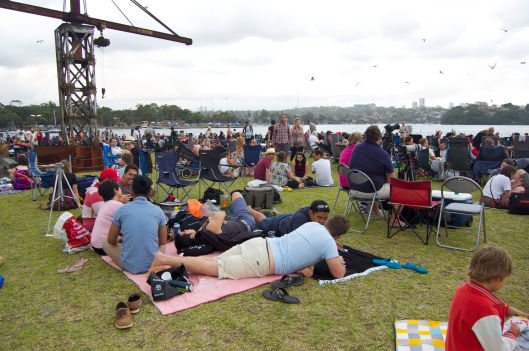 With other campers at the common area 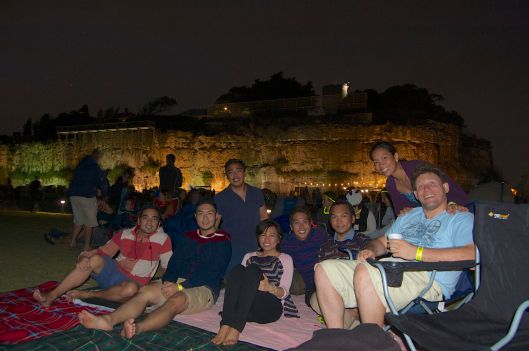 It got cold after sunset!

4. We didn’t have to queue for portable toilets. The toilets in Cockatoo Island were not first class and with the number of people there you can’t expect it to be spotless, but they were flush toilets and even late at night I could still see staff maintaining the cleanliness. In CQ, we had to queue for 10 mins for a portable toilet. And we all know how is it with portable toilets!

5. There was good party music near the kiosk selling alcohol and all of our friends danced there for about an hour before the midnight fireworks. Our friends danced as me and Andrew catched up on our zzz’s on the mat. Yeah, boring. But we were so exhausted from the move the days prior nye!

6. We didn’t go with the huge crowd trying to catch the train after the fireworks. We went back to our tents, our friends had drinks on the big tent and me an Andrew went to sleep. We were really boring that night, but we made up for it the following day when we did a road trip while everyone else caught up on their sleeps! 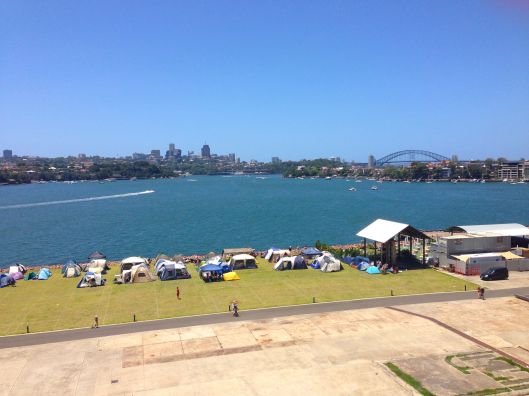 This is campsite A

2. If you’re a large group, you do not have to buy your tickets all at the same time. Just make sure you are all in the same campsite (A or B), and just checkin all the same time so they can put you all on tent spaces that are side by side. 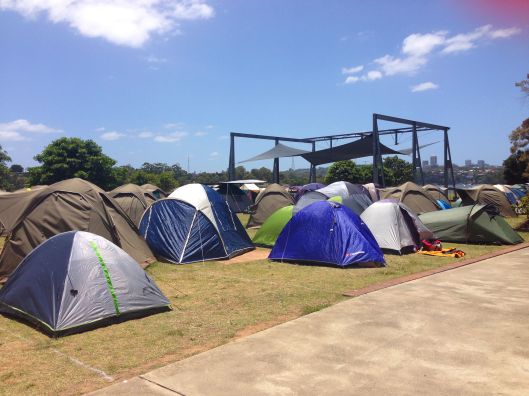 These are our 2 small tents (silver with green lining and the blue one) on campsite B. We had 2 tent spots but we used 3 tents, thus the space in between.

3. You can get 2-night camping, or just 1 night. We got the 2 nights, but we did not camped there for 2 nights. Me and my other friend (the booking was under his name) checked in on the 30th, claimed the 2 tent spots, pitched our tents and left the island. We were worried that we might get a bad spot if we check-in on the 31st as we do not have plans of going there early. Why we didn’t want to camp for 2 nights? We do not have proper equipments. We don’t have large esky’s to store our food, most don’t have chairs, etc.

4. No one stays on the elevated part of the island after 5PM on the 31st. What a shame. We climbed the stairs with our esky and chairs so we can go to the perfect spot, only to be asked to leave when we got there. There were no signs that “campers are not allowed beyond this point”. Only the royals can stay there. Those royals who could afford to rent those houses on top. Fine. 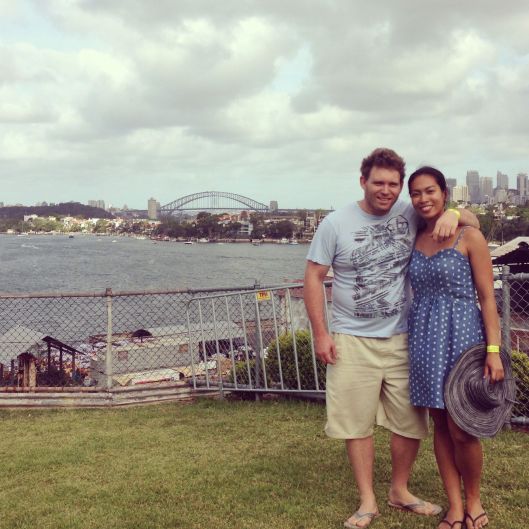 Me and Andrew on the perfect spot before we were asked to leave by the guards.