I spent too much time reading travel blogs and reviews before my trip. And I’ve seen posts that they didn’t like Lima. They said Lima is gloomy and lacking life, so I didn’t expect much from it. The main reason I planned to stay 3 nights there was because I knew I would need to have a rest and time to recover after the long flight from Sydney. Oh, and I was thinking of joining a cooking class as Lima is known to be the gastronomical center of South America so I thought I would need 1 full day for that.

Things didn’t go as planned. I didn’t need a long time to rest and I didn’t take cooking class. However, I did see the beauty of Lima in my 3 full days of stay. I actually think I can live in Lima for a year (haha, just for a year!).

I think my hostel helped a lot in my appreciation of the city. Staying at Lima Backpackers (http://limabackpackers.com.pe/) and having Marco as the host made a big difference. It felt like I stayed with a friend and he was so happy to have us as guests at his hometown.

So what did I do in Lima?

Our hostel is in Sucro, it’s quite near Miraflores and Barranco. Marco lent us Metro bus tickets so we can just top it up. It is 2Soles per ride, and we took the bus from the station near Plaza Vea (a chain of supermarket in Peru) Sucro to the Centro stop. Do not expect that all information will be available on the bus stops, we didn’t know which gate to board, but there were very nice locals that told us where to go. They don’t speak English but they were to tell us not to board a certain bus and how many more stops until the Centro station.

From the Centro stop, we just walked for 15 minutes until we get to Plaza de Armas where the free walking tour starts everyday. I was immediately smitten by the Plaza de Armas. There were beautiful old colonial infrastructures everywhere, I felt I was transported back in time. I’m not a history geek but I was in awe with the sights. I highly suggest to do the walking tour as it gives you a summary of this bustling place.

From the center of the plaza, you can see right away the Governor’s Palace, City Hall and Cathedral. 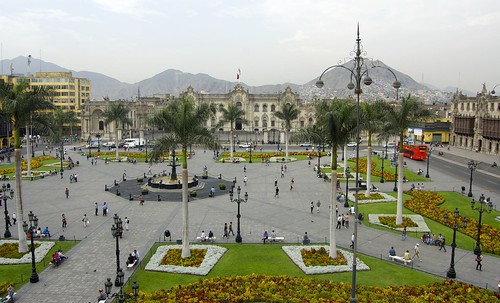 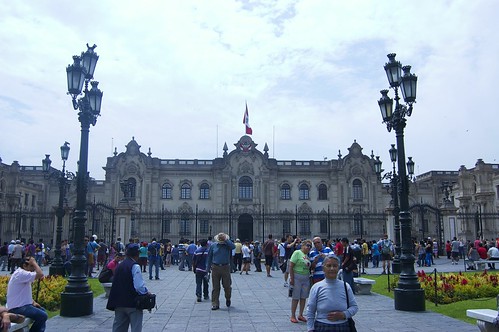 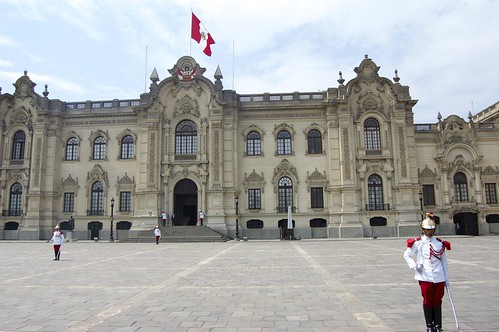 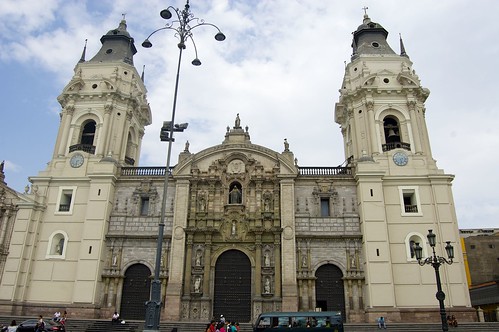 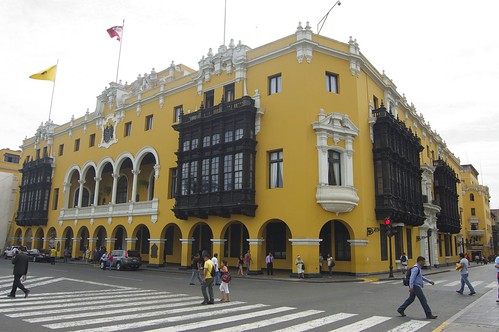 Through the walking tour that we were able to see other churches – Santo Domingo and San Francisco, an archaeological museum, tourist markets and food stalls. 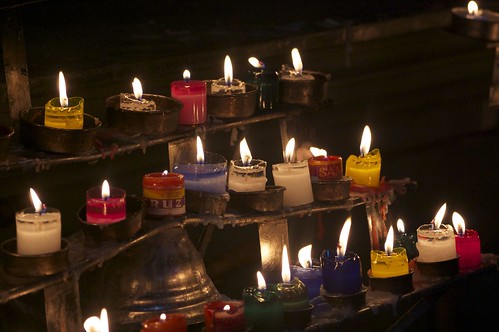 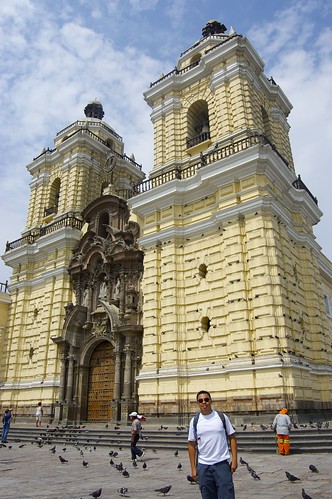 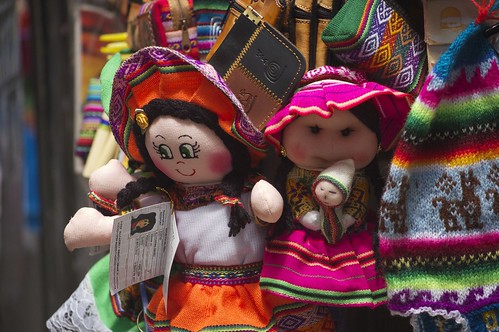 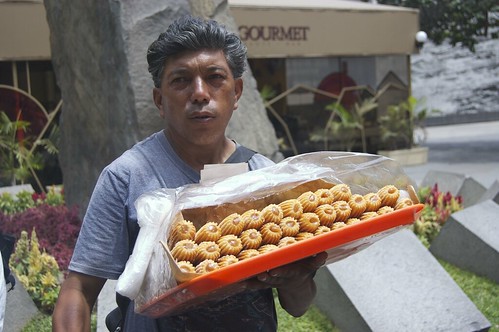 1st Churros in Peru – the caramel was just on the edge. We were ripped-off. LOL 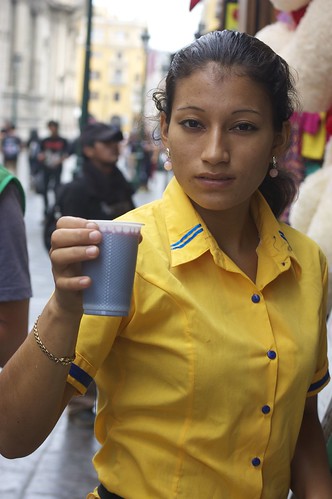 After the tour, we went back to the main square and sat there for a bit and people watched. We chatted with this Columbian guy who thinks Lima has the best colonial infrastructures compared other Latin and South American countries.

We then went inside the Cathedral (as suggested by the Columbian guy), and paid 30soles. It should’ve been just 10soles for the cathedral but we also wanted to visit the museum beside it and so we bought the package. We never went to the museum. Inside the Cathedral, there were several chapels and each chapel has it’s own story. We probably spent an hour going through the chapels. I guess being raised as Catholics gave us more interest on what’s in there. 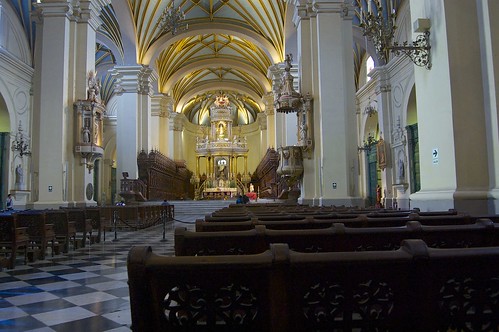 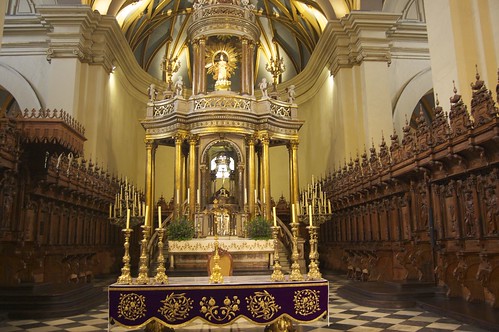 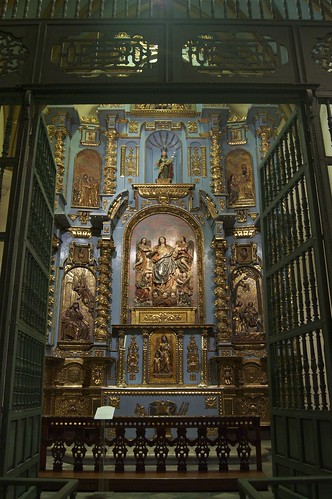 One of the chapels – each chapel is really beautiful. The lighting was not at it’s best and I didn’t have a tripod so most of my photos are blurry. Doh.

After the long tour inside the Cathedral, my travel buddy was already tired and sleepy as he woke up 3AM that day. I still didn’t want to go back to the hostel so we just compromised on doing a bus tour of the city. It was just 8Soles. It was cheap, but it turned out that it was primarily for Spanish speaking guests. The guide made an effort to speak in English but it was one line of English vs 2 minutes of speaking in Spanish for each featured place. It was still good to see the buildings outside the main plaza. 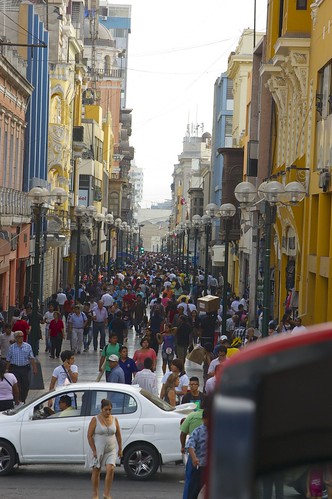 One main street off the Plaza de Armas. This photo was taken at about 4PM, and it just started to get packed. 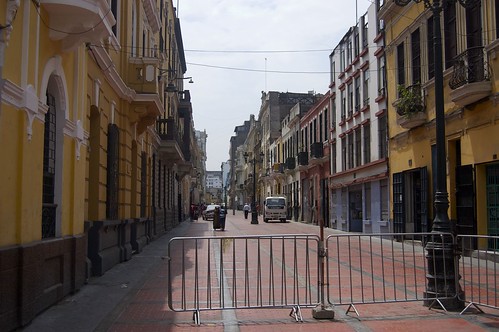 On our way to the Plaza at around 12PM, I was questioning how come the roads were empty. Look! Seems like Peruvians go out when it starts to get dark. 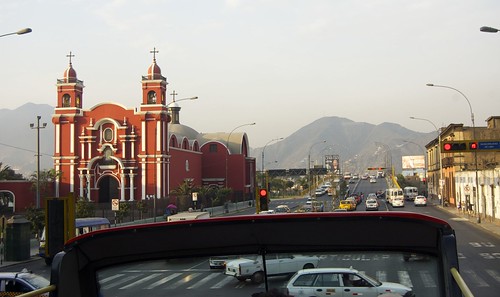 View while on the bus tour. 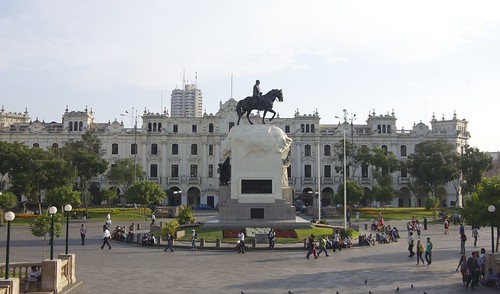 Some monument. Hahaha! I’m so sorry, I wasn;t taking down notes while on the tour. 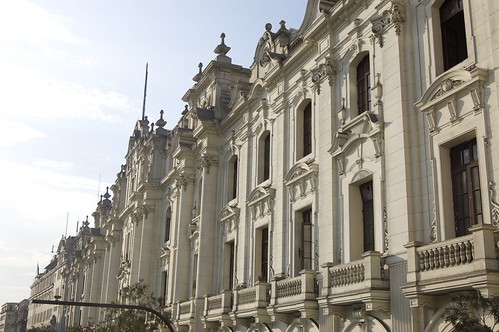 Beautiful architecture. I think this is a hotel. A very expensive one. 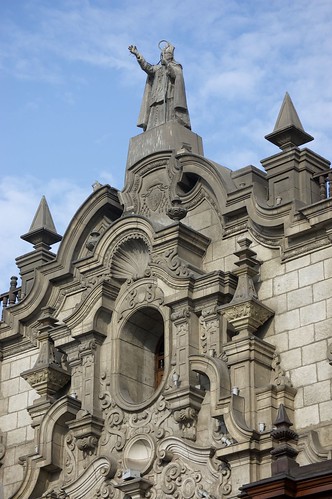 This is at the top of the Cathedral.

Then we had dinner at one Chifa place along the main street. Chifa is the combination of Chinese and Peruvian cuisine. Our meals were good, but was not exceptional. Also, I couldn’t pin point the peruvian side of the dish. Maybe we didn’t go to a good Chifa place, or maybe we didn’t order the right dish. 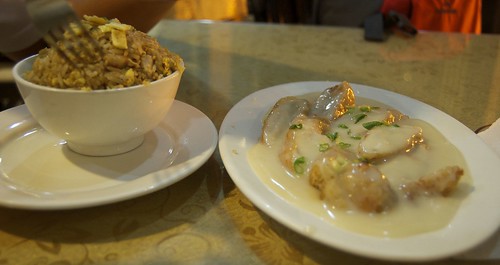 Some chicken with white sauce and fried rice. 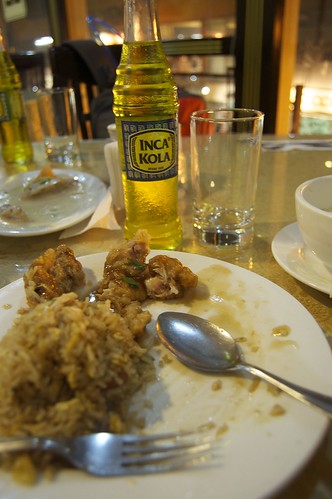 Breaded chicken, fried rice and Inca Kola – it’s the most famous beverage here. It tastes like amplified mountain dew, it’s so sweet. This was the first and last time we had this drink.

After walking for half day in Centro, we took a taxi back to our hostel and changed clothes for a night of drinking out with other hostel guests. That night, there were 5 guests in the hostel – me, Paul, Lisa, Ashir and Esther. Esther was about to take a 22+ hour bus ride to Cusco the next day so she didn’t join us.

As we changed clothes, our host – the best host ever- Marco, made Pisco Sour. I didn’t know how Pisco sour tastes like at that time but I enjoyed it. Marco’s mix was really good, and I’ve tasted several Pisco Sours upon writing this entry and I haven’t had another Pisco Sour as good as his. He made us 2 drinks, and we had a good chat at the hostel living room. It was past 11PM when we decided to head out to Barranco. First stop was this Peña where there’s a local band playing. It was Friday night and there were no seats. There was an entrance fee so we thought it was not a good deal to stand and pay. We moved to another bar, that I couldn’t remember the name. I can feel that it’s mostly locals meeting up there. It kinda makes you miss your friends, you’ll wish that they’re with you exchanging stories on how they’re week have been. We got jugs of beer there, and did several cheers for Paul’s birthday. 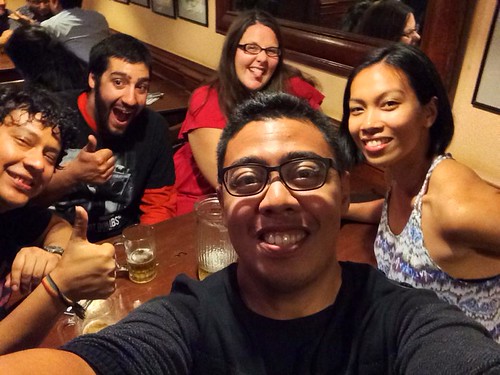 Birthday boy with us in the background – Marco, Ashir, Lisa and me. Photo from Paul’s iphone.

Then we moved at this old bar – it’s 99 years old. It has so much character, with the displays of wine and tables and chairs. We all ordered a cocktail that Marco was hesitant to recommend because he thought the taste is a bit strong. We all liked it. And maybe because we were a bit drunk that we still ordered beers after that.

We all had hangover the following morning so it means we had a great night. I was able to lessen the headache by popping Panadol (paracetamol) before I went to bed and the moment I woke up. Thanks to Lisa’s effective advice! It’s gonna be a routine every drinking night from now on. 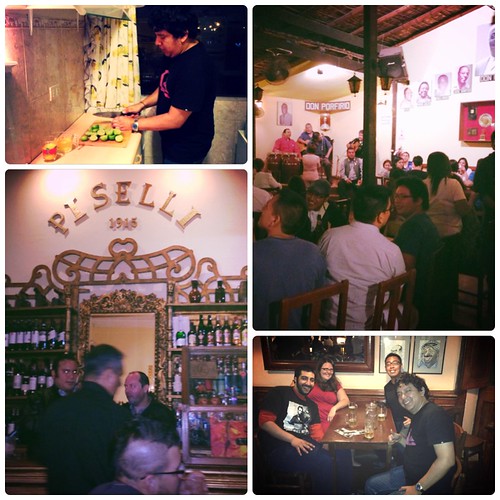