It was a typical winter day two weeks go when I day dreamed about the beef brisket goodness topped in chinese noodles. Who doesn’t love it? But then you just get 3 small pieces of the beef with your palanggana-sized (basin-sized) bowl of noodles and soup. That part sucks. Of course I wanted more meat so I thought of just making it myself. Thanks to google gods that day, I came across this beef brisket recipe: Easy slow cooker bbq beef brisket.  Yeah, I know, it’s not anywhere near the chinese noodles but I found a gem. The moment I saw the photo in that page, I knew I’ll have it one day. And that day  was on Satuday (I started on this post on Saturday and because it’s me, it took 3 days for a post to be published). 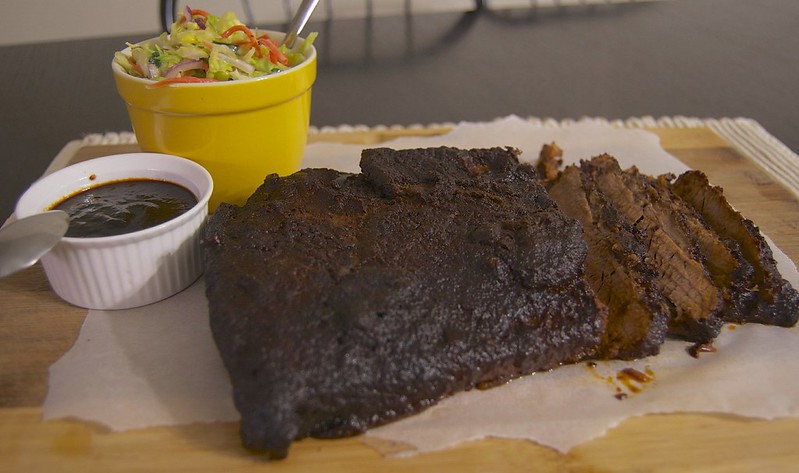 This is a dish that you have to plan beforehand. I’m a very unorganized person (haha) but I can pull off food preparations pretty well. First, I had a skimmed through the ingredients. I have all of the spices and sauces in my cupboard, except for the chipotle in adobo sauce. I haven’t seen it in woolies or coles, so either I order it online or I get it from Fiji Market in Newtown. Andrew said he’ll drive me to Newtown, so last Saturday (the weekend before I start cooking it!) we went to Fiji and got the chipotle and a dozen of other spices I’m not even I sure where to use them.

For the meat, I had to order it online from Harris Farm and had it delivered at home on Wednesday. Why Wednesday? Because it’s free delivery on Wednesdays and Saturdays.

Come Friday night, I took out the meat from the fridge, washed it and patted it dry. Some says remove the extra fat. I didn’t. We ❤ fat. 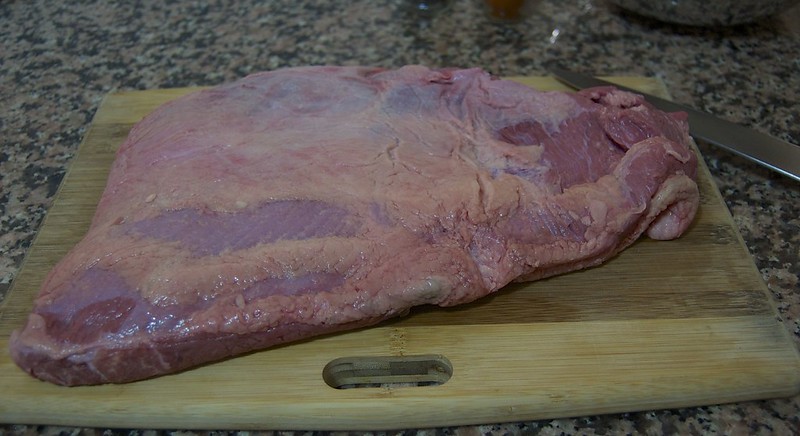 Then I cut it in half. Because the recipe says so and because it wouldn’t fit in our slow cooker if placed whole. 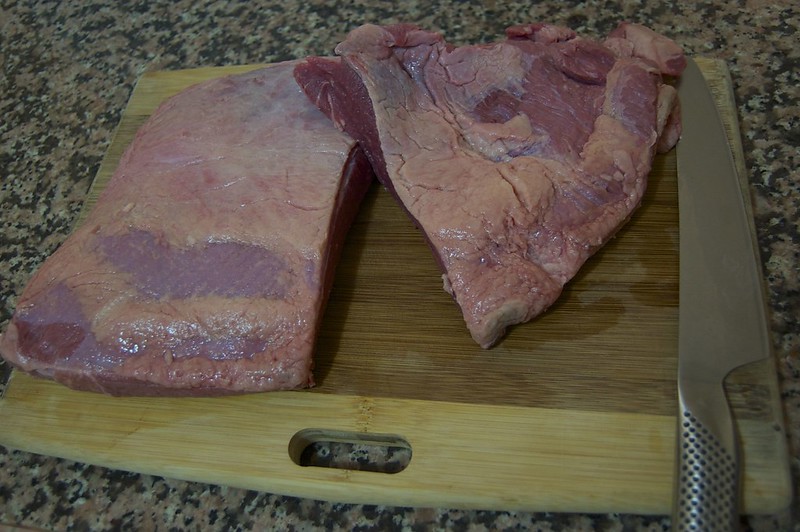 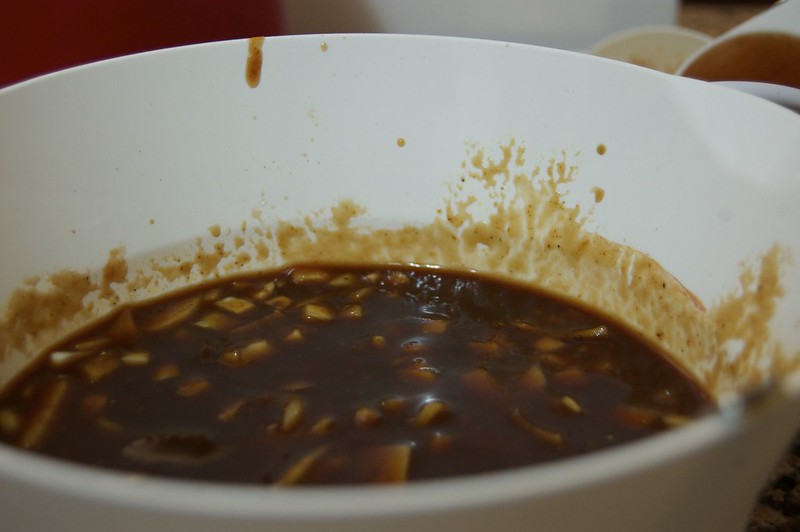 I made the spice mix and rubbed it around each piece of meat. For the rub, I’m such a bad-ass for following measurements so I added more paprika. I actually added smoked paprika just because I thought it’ll be good. For the sauce, I also doubled the chipotles because I thought 2 pieces won’t be spicy enough. It wasn’t a good move, I’ll discuss later. So I poured the sauce in the slow cooker and placed the 2 pieces of meat on top of each other. I turned the heat to low around 10PM. 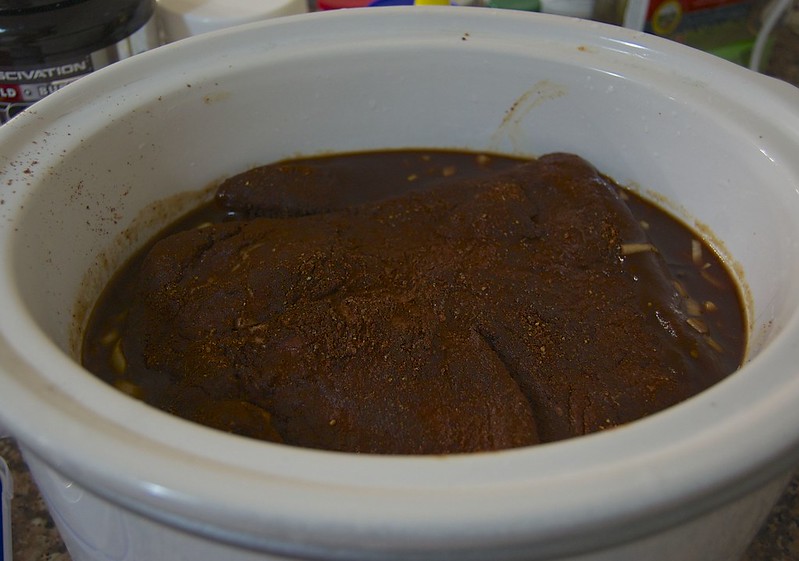 It was supposed to be in the slow cooker for 10 hours, but I woke up past 8:30AM. I guess the extra 30 mins didn’t do any harm. I tasted the sauce and it wasn’t quite right. It was too smoky and hot. I was expecting it to be a little sweet because of the tomato sauce(catsup) and sugar, but it wasn’t. I shouldn’t have added more paprika and more chipotle. Next time, I’ll make sure I’ll follow the measurements in the recipe.

I removed the meat from the sauce because we’re gonna have it for lunch and I didn’t want the meat to get more of the smoky and hot flavor from the sauce. We then went to the gym in preparation for the brisket. Haha! Also, if you’re hungry from a workout, everything will taste great. When we got back, I first worked on the sauce. It has to be simmered to reduce and thicken. Since it was too smoky and hot, I added more catsup/tomato sauce, brown sugar and apple cider vinegar. Sorry, I wouldn’t be able to tell you how much. I just added a bit of each until it I got the balance I wanted. While reducing the sauce, I made an awesome coleslaw (recipe here). Then I had to warm up the beef and bread in the oven.

And then we smashed it. 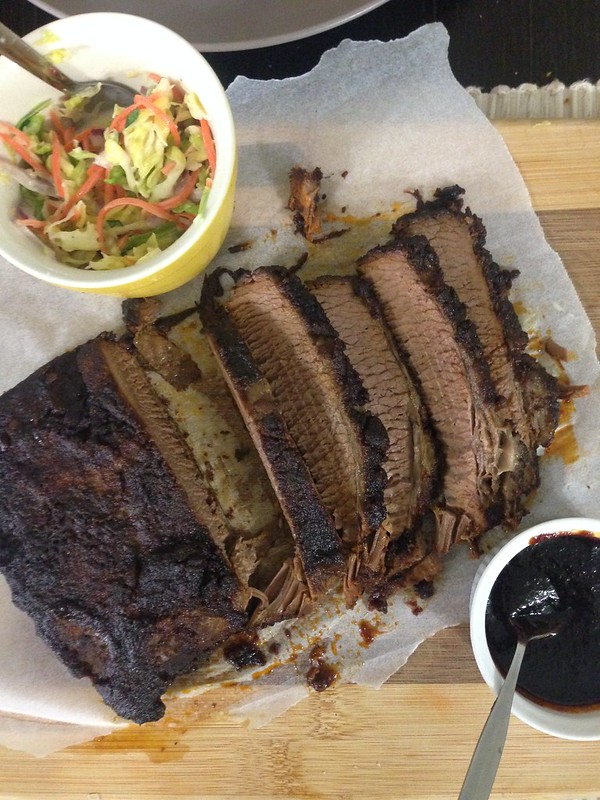 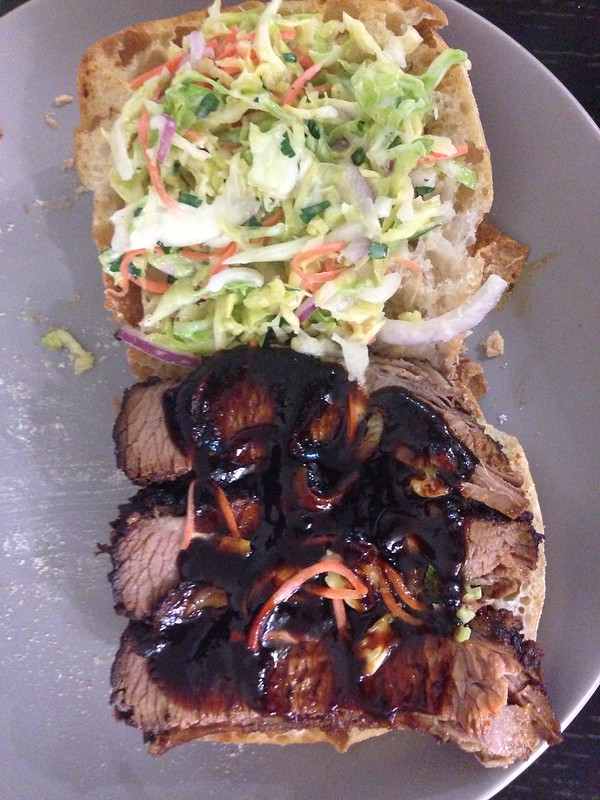 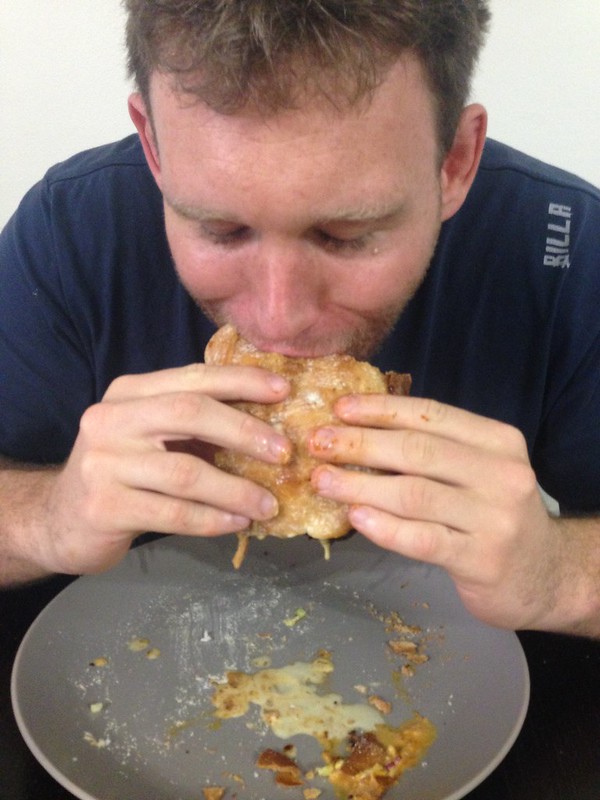 Don’t worry bout cooking 2kgs of meat when you don’t have a big family to feed. We had 2 sandwiches each that Saturday lunch, 1 each on Sunday, and there are still slices left in the fridge. It can be kept in the fridge for days so you can take to work for lunch sandwiches or salads. And if you’re gonna wait for 10hrs, it’s better to make a big batch.

I tried using my D40 to take photos but gave up and just used my iphone (we we’re hungryyy!). Light in our unit is really bad. I used a tripod but it’s limiting me to get the angles I wanted.