The new season of My Kitchen Rules is on. I’ve seen only 2 episodes and I was already itching to cook something good. Not that I stopped cooking, I still make big batches of chicken for our packed lunch and I still cook dinner, but I haven’t made something exciting for a while.

We weren’t really planning on going out for V-day as restaurants will be packed with lovebirds and most places will have Vday set menu so they can charge more. I knew I’ll be cooking something, but why not step another level and make a 3 or 5 course meal – and pretend that I am in MKR! I was initially planning to buy most of the stuff and just plate it up. But I ended up serving a 4 course meal, with amuse bouche. I even made my own chicken pate! 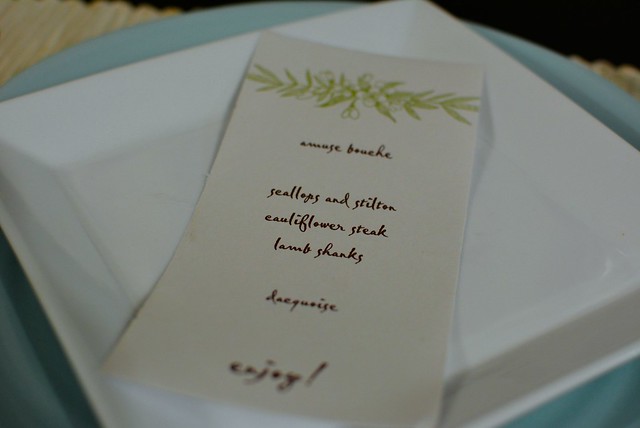 I found menu templates online – this was so easy and Andrew was impressed that I even had a printed menu. I really nailed the MKR format. Hahaha!

Amuse Bouche. It literally translated as “mouth amuser”. We paired it with Jansz. 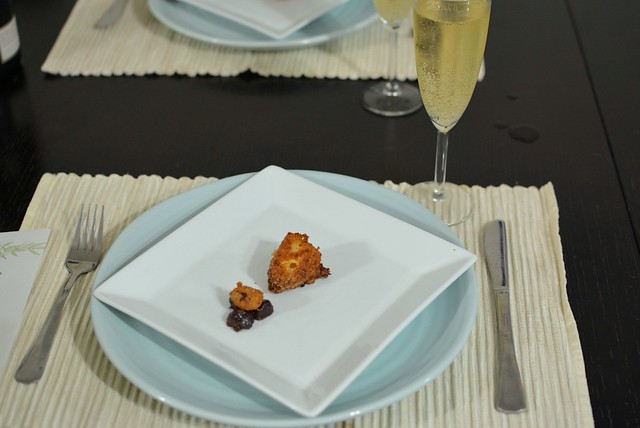 I sliced up camembert and placed them in the freezer 1 hour before cooking. I covered it with flour, then dipped in egg then covered with bread crumbs and deep fried. I must’ve left it too long in the fryer, it turned dark brown. I served it with cold quince. I know I could’ve plated it better, next time! 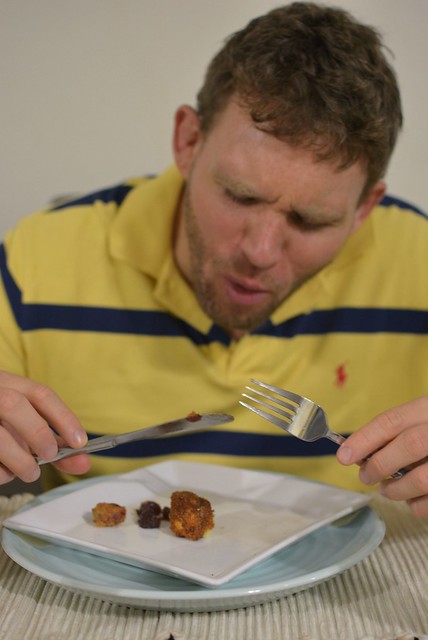 Look at that face – it must be good hey? 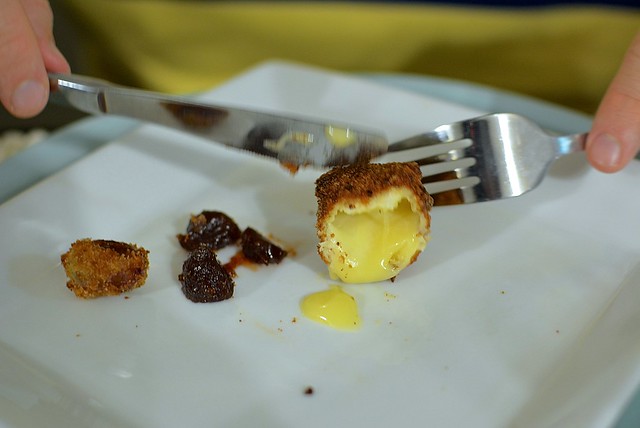 Scallops and Stilton. Stilton is a type of blue cheese. The recipe says stilton cheese and after reading about stilton, it says it has less aggressive flavor compared to other blue cheese. I’ll probably try a different (cheaper) blue cheese next time and see if it’s affect the flavor. I didn’t like blue cheese before, it’s one of Andrew’s influences in my life. Haha! 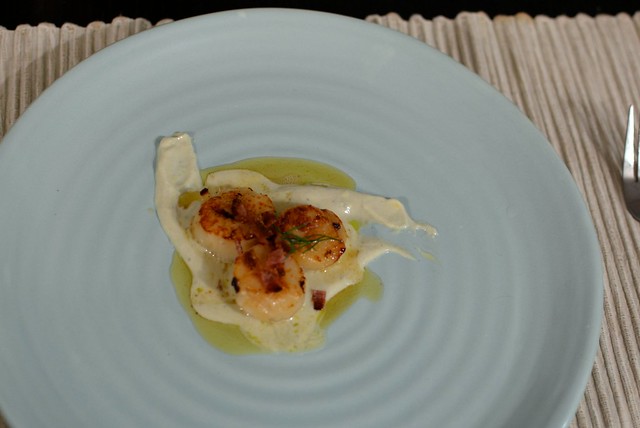 I fried a bacon with rind so I got lots of fatty oil, then on the same pan I fried the scallops and added butter. It was my first time to cook scallops and I overcooked it a bit, but nothing to destroy the flavor of the whole dish. It’s probably my favorite dish of the night. 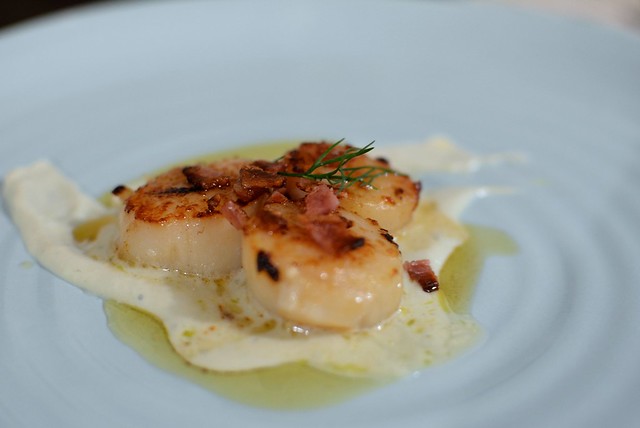 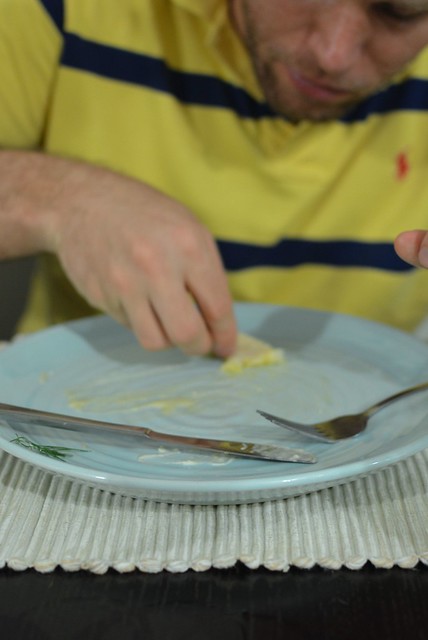 Side bread and chicken pate. There is no good bread shop here in Ashfield and the best bet is Woolies. The sourdough cob was good and I even asked them to slice it up for me. 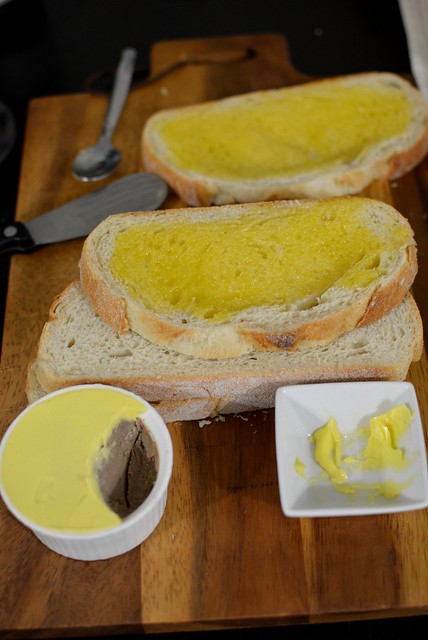 I used this recipe for the pate and when I was blitzing it at the food processor, I felt that it was just waste of time as it didn’t taste good. It even looked yuck. But after few hours in the fridge, it turned out to be divine! It actually got better the day after and I already had 3 slices of bread with pate today.

Cauliflower Steak. I over-steamed it and forgot that I will still have to roast it. It still tasted good, but Ester’s version is still waaaay better. I have to try the almond meal dressing some other time. 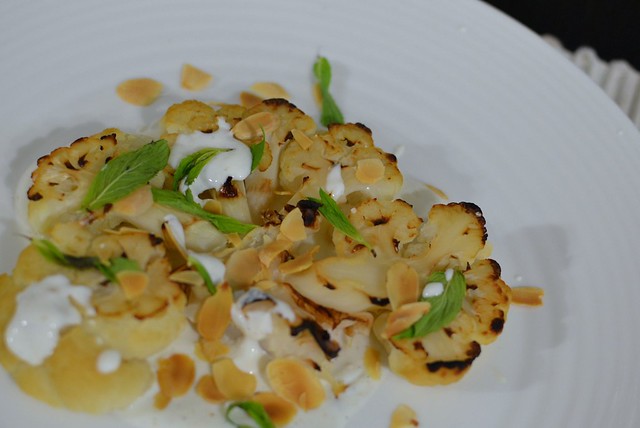 Lamb shanks with potato parsnip puree. I always make good lamb except for that one dinner when we had 5 people over and the lamb leg that we got didn’t fit my “lamb pot”. The shanks were in the oven for 4-5 hours and I checked it twice and adjusted the flavor. 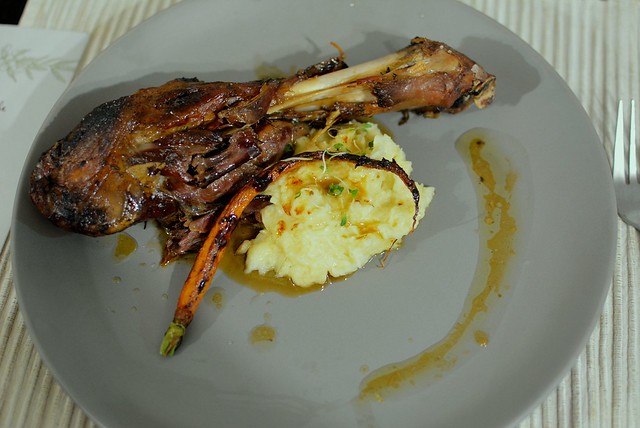 Andrew commented that the mash wasn’t silky. I have a tough critique! But I always appreciate his honesty when commenting on my food because that’s when get better. I have to admit that I got lazy and didn’t pass the mash through a sieve or processed it. And yeah, it would look better on the plate if it’s silky smooth.

Flavor-wise, I don’t think he has any complains. 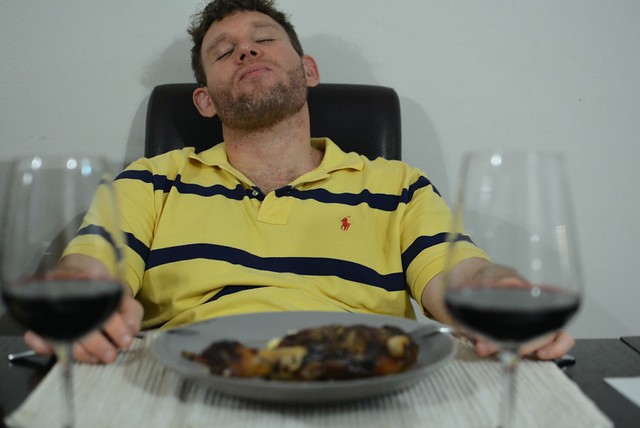 I followed the format of my lamb leg recipe, but omitted sweet paprika and oregano, and added cumin instead. Lamb was paired with The Aunts Shiraz. 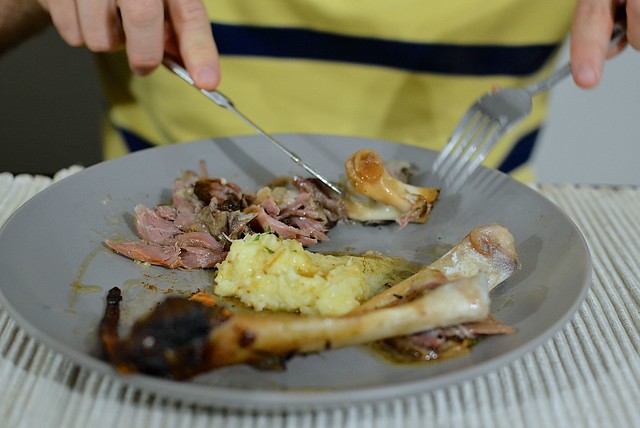 Lime sorbet. This is just store bought, but it was really good. The brand is gelativo. I added this as palate cleanser. 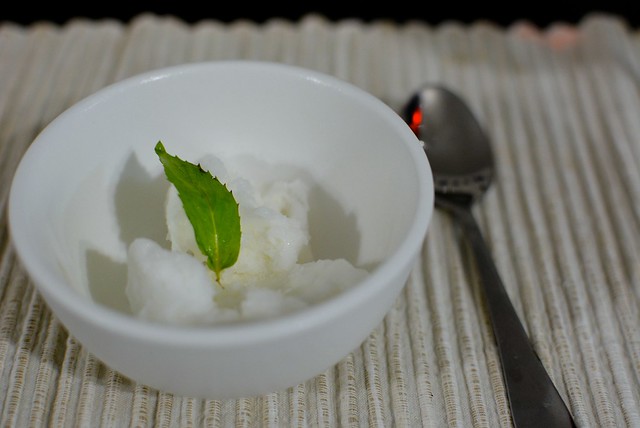 Chocolate-Espresso Dacquoise. This should be the star of the night because of all the effort I’ve put into it. It tasted really good and I am quite impressed that a non-baker me can pull this off. The recipe is good because it included illustrations that helped a lot. 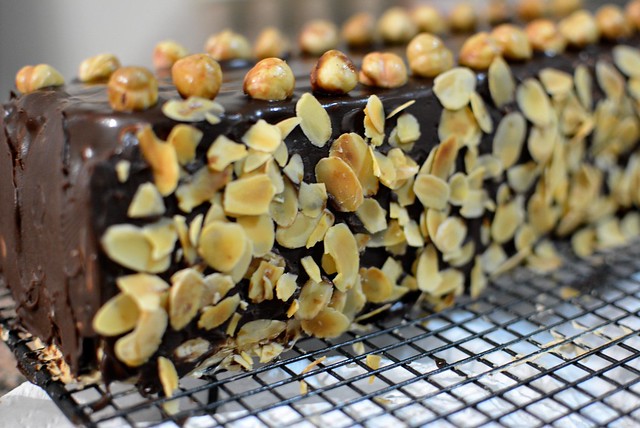 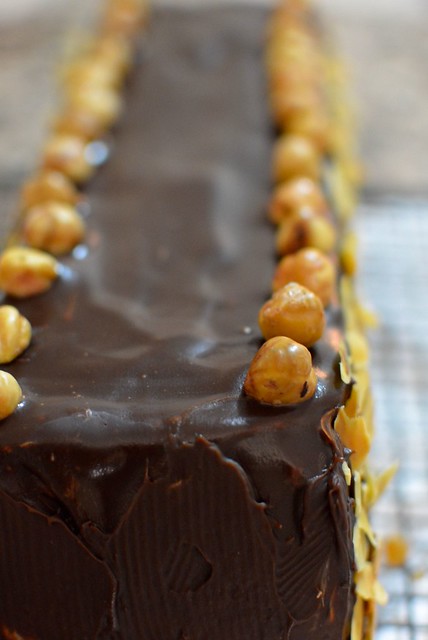 We had a slice each and I want to frame the rest of the cake so no one can touch its preciousness. 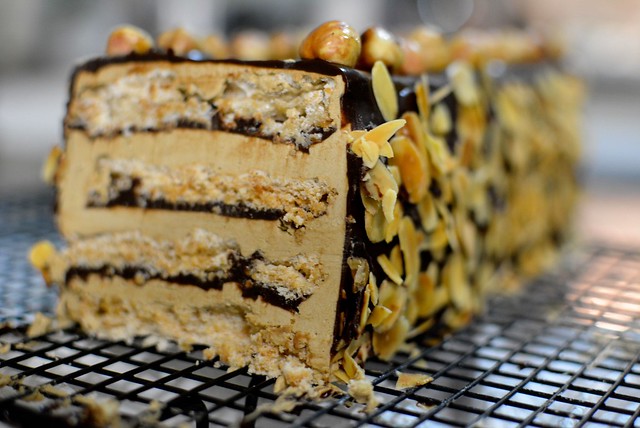 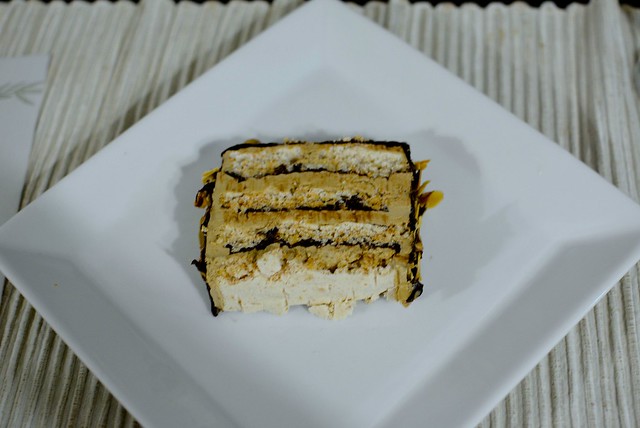 The Planning. It started with googling “5 course meal ideas”. I’ve read several articles and forums and there’s nothing that gave me the complete set of recipes that I like. Most of the 5 course suggestions included soup, and no way I am serving soup on a summer day at our place. We don’t have aircon! I was certain that I will make lamb for the main course, and searched for a good recipe. I’ve been meaning to make the scallop recipe from last year’s MKR so I included that. Then I remembered Ester’s cauliflower- simple with very good flavors. Andrew is not a fan of cauliflower but I thought maybe I can convert him (I’ve done this successfully with other food that he thinks he doesn’t like). For dessert, I knew what got into me but I decided to this complicated cake- dacquoise. I thought it wouldn’t be so hard, but it definitely was for non-baker like me. I stumbled upon the recipe of fried camembert and thought it will be an easy dish for amuse bouche.

I thought my menu is easy. The lamb will be slow cooked and the rest, I can prepare them right before I serve the course. I just had to prepare the sauces prior. Sounds manageable.

On the day. I started the day doing the merengue of the dacquoise because it has to be in the oven for 1.5hrs and let it cool there and because I will need the oven for the lamb. I also made the the liver pate while the merengue is in the oven. And then we went to the shops to buy lamb, scallops, etc, etc. It took me more than an hour to finish the shopping because I was so unorganized. But I am always like. When we got back, I worked on the lamb. Seasoned and browned, and then placed in my “lamb pot” with all the amazing herbs. I placed it in the oven at 140deg and forgot about it.Then I worked on the buttercream and ganache of the cake. I was already feeling frustrated about it but I didn’t want to throw out my effort for the merengue.

I prepared all the sauces – the blue cheese sauce for the scallops, and the sauce for the cauliflower which was a bit of a fail. The recipe calls for almond meal and I thought I still have some in the pantry but I didn’t. And I didn’t want to use the food processor again (because I don’t want to wash it again). So I just improvised with yogurt and cumin. I steamed the cauliflower so it just needs to be roasted before serving. I also boiled the potatoes and parsnip for the puree.

I did all those in between of building the dacquoise. It was like working on an art project, I had to measure and cut out the merengue bars then spread the cream and ganache bit by bit and put it in the fridge to harden. I probably spent more than 3 hours for that cake. I could’ve just sat on the sofa and watched netflix during those hours if I just made a simple dessert.

The verdict. It was tiring, but loved the experience! I learnt so much on time estimates and cooking (more on not overcooking) food. I now know how to make merengue! And a good ganache!

I spent so much time researching for recipes that I can probably create another 3-5 course menu. Maybe I’ll make an autumn menu, and another one for winter?

Another good thing is we can have everything again the night after. We still have scallops in the fridge, and I made 5 lamb shanks yesterday so there are still 3 left. And the cake! It’s staring at me whenever I open the fridge!

And the best part is – having good food at the comfort of your own home.

I guess my kitchen really rocks!

1 thought on “My kitchen rocks!”