Have you met a Filipino doing a long holiday? With long, I meant more than 6 months or so.

I am pretty sure there are few Filipinos who had or travelling for this long, but it is not very common.

I was 24 years old when i went to Dublin for a company training. I had a 3 day weekend between the courses and decided to join an organised tour to see other parts of Ireland. It was on the tour when I met this lady and she said she had been travelling for 10 months and will continue to for 2 more months before going back to Australia. My reaction was like a kid given a new toy or a bag of lollies (because I am a fattie, let’s go for the bag of lollies) – “WOOWWW!! That’s amazing! travelling for a year?!? I didn’t know it’s possible!”. And I didn’t stop there- I even asked how could she afford it. I asked about her job, how could she pay for the flights, etc. Hahaha! I was so naive with the whole long travel idea. 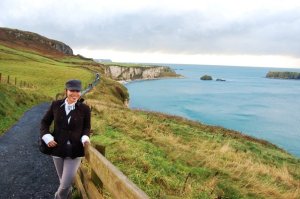 Me in Northern Ireland, November 2009

It’s not just a thing for Filipinos. Why?

1. Gap year is a no-no. After finishing high school, it is assumed that you will start college/university the next school year, with just 2 months break. I do not know any Filipino who did a gap year after high school or during college to travel. Some had forced gap years because they couldn’t afford to go to university anymore.

See, this is the cycle of life from where I am from – birth, preschool, grade school, high school, university, work, get married, have kids, send your kids to school, die.

Do you see any travel after high school? No. And if you risk your chances for going to a good university, you risk the rest of the cycle. You probably will not have a good job, then you will not find a good partner. And when you get to have kids, you might not be able to send them to a good school.

2. Money is difficult. Even if you decide to go against this cycle and insert some travel somewhere at any point, it will be very difficult to have the money to fund your travel, specially overseas travels.

I had this conversation with another Australian girl when I was already here in Sydney. She said after high school she worked on a cafe for 4 months, stayed at her parents and saved up all her earnings. With this, she was able to travel to Europe for 3 months. And there’s no way this would have been possible if she was living in the Philippines.

Minimum wage in Metro Manila is Php466 according to this. And this is equivalent to 10.5USD with today’s rate. Those are the blue collared jobs that do not require college diploma. Another reason why gap year is impossible!

How about those who got a good job. Maybe they can save up to travel? Still not. When I was working there, I was taking home around $500-$700/month. But of course I had to eat, go to work, give money to mama, and live. I’ll be lucky to save $100 a month. After a year, I will have $1200. Hurray! Probably enough to spend 2 weeks in Vietnam-Cambodia-Thailand. But I didn’t. Mainly because I didn’t save that much, and I was having local trips on long weekends.

3. Long leave from work is not common. Base from wikipedia, the statutory minimum leave in the Philippines is 5 days per year. Wow, I didn’t know that! But my previous company gives 10 days, I think. Or 15? Anyway, but it’s seldom that employees use it all in one go. If you request for a month long leave, you’ll probably good as resigning.

But I am happy that I see a lot of contacts in Facebook going overseas for a holiday. They probably took advantage of a long weekend because of a public holiday, and used some extra annual leaves. And the airfare promo to nearby countries probably helped – which what I hated most about being in Sydney, going anywhere is expensive.

I wonder if I stayed in Manila. My salary would’ve increased, but will it be enough to buy tickets to a faraway countries? But I would’ve visited more of the local spots, and maybe more of South East Asia compared now that I’m based in Sydney.

To the girl who I interrogated, maybe a little too much, about her long trip and how could she do it, I am sorry if you got uncomfortable with my questions. I was honestly interested and amazed about those people going on long holidays. And even up to now, after 4 years of earning dollars, I still can’t figure out on how to do it.

One day, still not losing hope.